Travel by train from Bologna to Florence

Over 5 kg or without carrier

Train tickets
From Bologna to Florence and from Florence to Bologna

Don't miss our incredible offers: buy your train tickets from Bologna to Florence or from Florence to Bologna with Italotreno!

Train is the fastest connection between Bologna and Florence: get to your destination in only 35 minutes!

Discover all of our offers and travel at the best price. Buy your Italo high speed train tickets Bologna-Florence and Florence-Bologna in advance and save!
BOLOGNA TO FLORENCE TICKETS

Discover all our travel class

Vibrant with colours, this journey ambience provides services such as reclining Frau leather seats, footrests, individual power sockets and independent tables. A high number of seats is available in our 7 Smart coaches, all with free Wi-Fi connection.

Your Comfort is served

Avoid queues and pass through checkpoints with ease thanks to a dedicated access to your train with the new Fast Track service.

Our onboard staff is ready to welcome you with a selection of sweets, snacks, warm drinks and cold beverages.

Our reclining Frau leather seats are equipped with soft individual armrests, and they ensure a wide personal space and freedom of movement. And if you select the single-seat option, your trip can be even more comfortable. When you need to stretch your legs, the Break Area is equipped with vending machines with espresso coffee, cold drinks and snacks.

Also, a number of small utilities is available for each passenger: a power socket, a reading light control, a glove compartment placed between double seats. Plus, a free Wi-Fi connection is always available.

Travel in our most exclusive ambience and relax in comfort and privacy whilst enjoying unrivalled entertainment:

- Dedicated access to your train with the new Fast Track service

- Dedicated catering including expresso coffee and a mouthwatering selection of Italian sandwiches, bakery products and drinks.

- Every seat includes a 9” personal screen so you can enjoy the great selection of complimentary onboard entertainment available on our Italo portal, or browse the Internet in total comfort. Service available on the AGV train.

- A generous choice of Italy’s favourite newspapers and magazines to read at your leisure as you travel.

Let yourself be inspired, travel with Italo
Mini guide: what to visit in Bologna and Firenze

Emilia Romagna, home of good food and the unmistakable cheerfulness of its inhabitants, is the perfect destination for a comfortable trip in train. With Italo, you can get to Bologna easily for a stroll through its famous porticos and medieval buildings.
Its cobblestone streets call to mind its great medieval past, which harmonizes with its current modern character, making it one of Italy’s most avant-garde cities. Bologna is home to one of the oldest universities in the world, which is why it has always been a privileged destination for Italian and international students, who have shaped its cosmopolitan and jovial character. It is thus by no coincidence that Bologna also goes by several affectionate nicknames, which refer to the cornerstones of its unmistakable character. “Bologna la Grassa”, in honor of its renowned culinary tradition; “Bologna la Dotta”, thanks to the university founded there in 1088. “Bologna la Rossa”, a clear reference to the terracotta color of its historic buildings and its porticos.
For a walk among its most beautiful places you’ll be spoilt for choice: whether you are a cultural traveler, a lover of museums and ancient churches, or more devoted to the good life between good food and fun, Bologna is sure not to disappoint you.
Start your itinerary in Piazza Maggiore, seat of the Town Hall since 1336 and object of the lyrics of Lucio Dalla, one of the most famous Bolognese singer-songwriters. Here, you’ll find the Palazzo Comunale and the Municipal Art Collections, which will give you an idea of the history and culture of the city stemming from the 13th to the 19th century. From this piazza, take off along the large covered path of Bologna’s famed porticos, which wind through the old city for 40 kilometers and are candidates for entry as a UNESCO World Heritage Site.
If you are in Bologna to appreciate its art, then the second stop you can’t pass up is the Pinacoteca Nazionale, which houses some of the most important works of the Emilian artistic panorama such as Giotto, Parmigianino, the Carracci brothers and Raffaello.
If you’d rather continue exploring the centre and you’re up for some physical activity, what better occasion to climb the famous Bolognese towers? The Torre degli Asinelli and Torre Garisenda, built by the Asinelli family between 1109 and 1119, dominate Piazza Ravegnana and are the symbol of the city. The Torre degli Asinelli, the tallest with its 97 meters and 498 steps, is open to the public. We recommend you visit only if you do not suffer from vertigo or if you have already graduated ... the urban legend says that climbing the tower brings bad luck to students who have not yet graduated!
If you want to get to know the more ecclesiastic side of Bologna, and some of its most magnificent architectural works, start off with the Abbey of Santo Stefano and the Gothic Basilica of San Petronio, which ranks 15th among the largest churches in the world. The artisanal and commercial tradition of Bologna is centuries-old, making it an ideal destination for shopping. The area with the highest concentration of shops is the “Quadrilatero”, which houses numerous historical artisan shops, jewelers, markets and local gastronomy shops. Finding the pulsating commercial heart of the city is easy, you just start from Piazza Maggiore, go down via Rizzoli, piazza della Mercanzia, via Castiglione, via Farini, piazza Galvani and via dell'Archiginnasio.
It’s worth visiting Bologna just to try its renowned gastronomy: you are in the homeland of tortellini, ragù, and mortadella ... you’ll find it difficult not to be tempted by the wide range of typical restaurants and taverns that you’ll find in every corner of the city!
Finally, to appreciate the greener side of Bologna, you can move away from the center and enjoy moments of relaxation in the hills around the city. There are numerous public parks you can visit when taking an excursion outside the city, such as the Villa Spada park, the San Pellegrino park or the Villa delle Rose park.
Now all that’s left to do is buy your train ticket with Italo and leave for Bologna!

What to visit in Florence

You can only really understand what it means to be a city of art when you visit Florence. The city is a work of art to be discovered together with Italo, which will take you directly to the cradle of the Renaissance!
Arriving to Florence by train is worth the trip: the Santa Maria Novella station is located just a few steps from the Basilica of Santa Maria Novella, a masterpiece of the Florentine Renaissance – unmistakable for its white marble façade. Inside, you can admire its Museum, which is located in the cloister of the basilica. From the Basilica, the historic centre is just a pleasant walk away, where you can watch the jewel of Florence unfold before your eyes. You’ll find yourself among splendid sixteenth-century buildings such as Palazzo Antinori and Palazzo Strozzi, until the cobbled streets take you to Piazza del Duomo, in front of the Cathedral of Santa Maria del Fiore and Giotto's bell tower. Just like that, you’ve arrived at the most iconic place in the city. Take a moment to admire Filippo Brunelleschi's red dome from 1436 and the white, pink and green marble façade of the bell tower. From its top, you have an unparalleled view of the city and the surrounding hills. While in front of the Duomo, feast your eyes on the Romanesque-style Baptistery of San Giovanni.
Another nerve centre of the city is the nearby Piazza della Repubblica, dominated by the Colonna dell’Abbondanza. This piazza has always been used for trade and hosted the Old Market. Continuing your walk, follow via dei Calzaiuoli towards Piazza della Signoria, the center of social life in Florence, where instead art is the centre of attention. The piazza is in fact dominated by the fourteenth-century Palazzo Vecchio, now the seat of the Municipality, and by the Loggia dei Lanzi, an open-air art gallery that houses Renaissance sculptures by Giambologna, Benvenuto Cellini and Agnolo Gaddi. The Fountain of Neptune and Michelangelo's copy of the David complete the picture of the most important attractions of this piazza. Continuing along the Piazzale degli Uffizi, adjacent to Piazza della Signoria, you’ll reach the Uffizi Gallery, with its renowned collection of Renaissance art that has contributed to making Italy famous in the world.
If you don't have time to go through the Gallery and take it all in - which requires several hours to really be fully appreciated – just take a few steps more and you’ll find yourself on the Lung'Arno. From here, you can catch a glimpse of another unmistakable landmark of Florence, the Ponte Vecchio, lined with shops and goldsmith workshops. Once you have crossed the bridge, you’ll have crossed into the so-called “Oltrarno” where you can take a rest immersed in the green heart of the Boboli Gardens, just a few steps from another important Florentine palace, Palazzo Pitti. If you’d rather continue onward, let yourself get lost in the streets of the lively Santo Spirito district, where you’ll find numerous artisan boutiques and shops where you can self-indulge and do some shopping.
Another good reason to take a trip to Florence is its gastronomy. The centre of Florence is populated with inns and restaurants of all kinds, where you’ll have no difficulty in finding a place to recouperate after so much walking.
If you are a carnivore, you certainly cannot miss the champion of Florentine cuisine, the steak. How to recognize the real one? It must be tall, fresh off the grill, with an average weight of 2 kg! Not even vegetarians will remain dry-mouthed, as another fundamental dish of Tuscan cuisine is the ribollita, the vegetable and bread soup (strictly Florentine, that is, without salt).
The artistic and cultural wealth of Florence is so vast, it’s impossible to settle on visiting just a single day! With Italo, it’s so easy to get to, we’re sure you’ll repeat the experience!

Italo Travel Pack: flexibility and and savings up to -80%

Children under 14 years of age travel free of charge with their family.

Travelling together is more convenient! 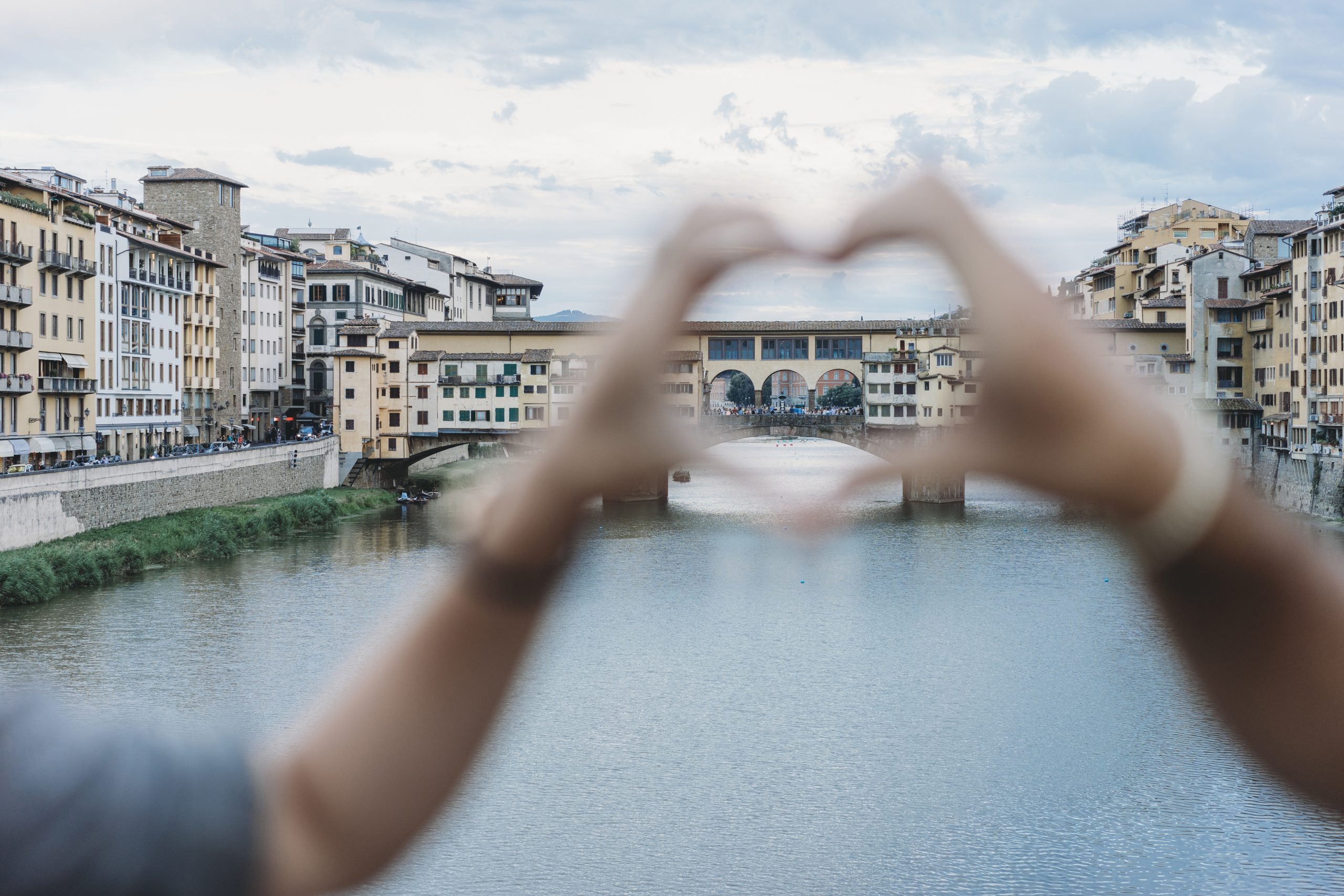 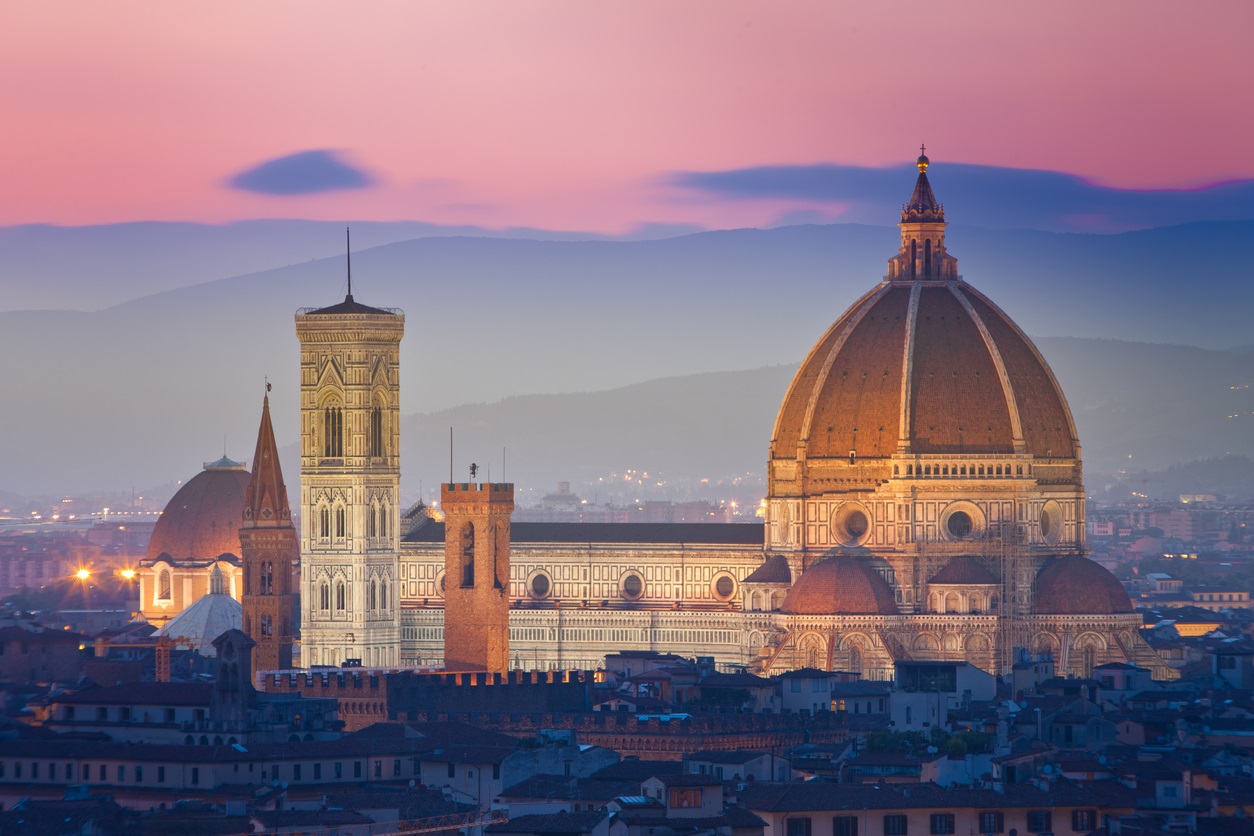